It all began on June 30, 1961, when the Most Reverend Bryan McEntegart established the parish in Bergen Beach/ Mill Basin of Brooklyn. On that date the Bishop appointed the Reverend Patrick Kenny, Pastor and the Reverend Dino Zini, assistant.

Early in 1961, the Brooklyn Diocese purchased two parcels of land facing East 69th Street. Subsequently additional land was purchased to complete the block between Avenue U and Veterans Avenue. A house was purchased at 2017 East 68th Street to serve as the rectory.

The parish began to function on July 11, 1961, when 100 men met at Mary Queen of Heaven Auditorium. General plans were announced, the Holy Name Society was considered and plans for a census were laid. On July 18, 1961, 175 women met and the seeds for the Rosary Society were planted. The result of these meetings was the beginning of a parish spirit of enthusiasm.

The first Masses were celebrated in a tent erected on Veterans Avenue (Island Avenue) on Sunday, August 20, 1961, the feast of St. Bernard. The tent became the “temporary church and hall” for three years. The men of the parish worked to give the tent security. A storm or heavy wind caused an automatic alert in the group. Many hours were given by these devoted men. During the tent period God was good to us and never was it necessary to cancel Sunday Masses. 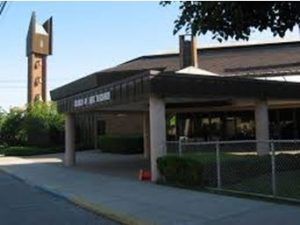 During the Autumn of 1962, Bishop McEntegart approved the plans for a chapel-auditorium and sixteen classrooms. The plans for a modern brick building were drawn up by John O’Malley and Associates as the architect. The building was constructed under the supervision of Monsignor John Rudden of the Diocesan Building Commission. The general contractor for the building was John J. Kennedy and Company.

On July 21, 1963, the Most Reverend Joseph Denning, Auxiliary Bishop of Brooklyn, broke ground for the new buildings. An inspiring sermon was preached by the Rev. William Matters of St. Luke’s Church. Work began in August 1963.

The first Mass was celebrated on August 20, 1964 (St. Bernard’s Feast day) in the evening. The auditorium was lined with people totaling over 1100. This marked the first big step since the foundation of the parish. In just three years they had a suitable place for honoring God and a school for the Catholic education of their children. The church area of the school was designed to accommodate 950 people, and the school with full enrollment would be able to educate 800 students.

It was no longer necessary to attend Mass under a flapping roof. As we attend Mass today, we can thank God for His goodness as we remember our humble beginning.